Saving Baseball From Itself: A Virtual Lockout

A “virtual lockout/strike” lets baseball owners and players battle it out financially—but the games go on. Applies beyond sports. Huh? How? Really? Yup! Read on!

Jim Sebenius and I present a novel idea—a “virtual lockout” or “virtual strike”— that lets owners and players battle it out financially to their hearts’ content—but that keeps the games going, fans in their seats, and the sport undamaged. We recently described it in a cover story in the Boston Globe’s Sunday “Ideas” section.  Given a lot of intrigued reactions, including from labor relations experts and those with a large direct stake in the issue, we think you might enjoy checking it out here.

This seemingly “impossible” concept—a full-throated labor-management fight while the games go on?—applies beyond sports but we describe a current case to show how it could work: facing a host of divisive issues, baseball owners “locked out” the players two minutes after the current Collective Bargaining Agreement (CBA) expired in December 2021.

,After 26 years of labor peace since baseball was badly wounded by the 1994-95 strike and in the shadow of truly ugly owner-player talks last year during COVID that ended with a costly imposed settlement, there is a renewed risk of mutual bloodletting. Others too would suffer if games were canceled including fans, ballpark workers, hot dog vendors, sports bartenders, local and national media, and so on.

Drawing on earlier work with our Harvard Business School colleague the late Howard Raiffa, Jim and I show how to prevent these bad outcomes (see the pdf below).  The two sides should put this kind of “virtual” insurance policy in place now, in case negotiations become irretrievably stuck and tempers boil if there is no deal with the season getting close. 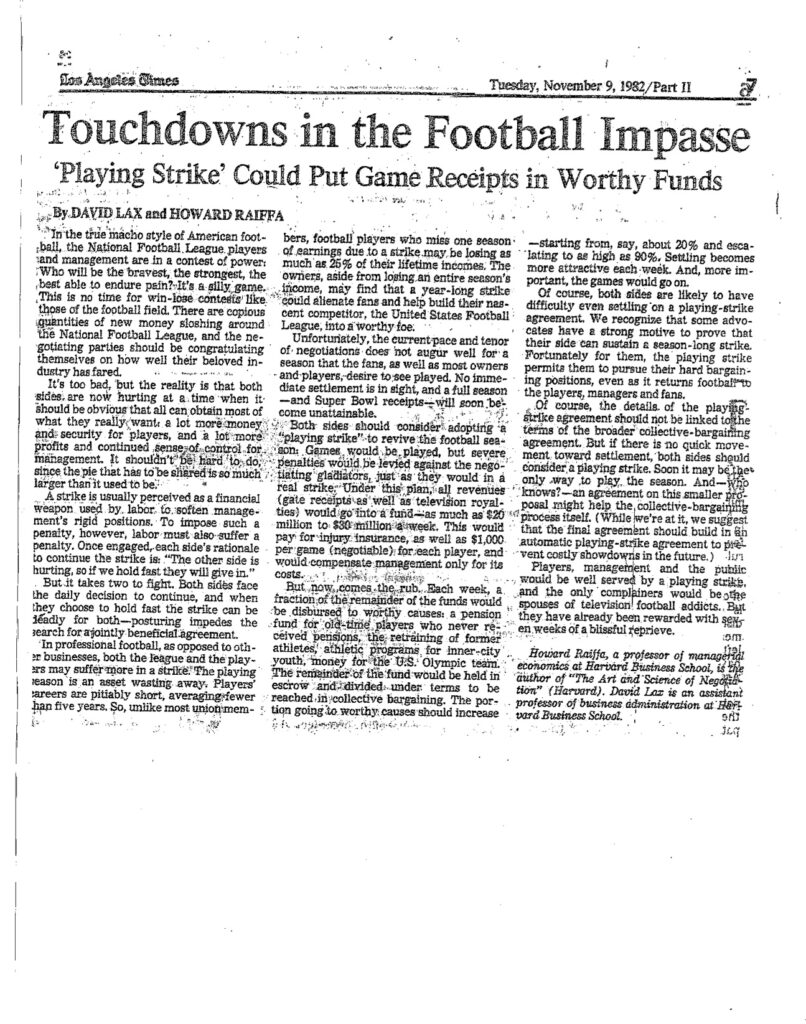 In a nutshell, while scheduled games would continue as usual under our proposal, neither side would receive any money—in salaries, ticket sales, media, etc.—beyond the much smaller direct costs necessary to put on the games. Instead, all that money would be put into escrow—to be released only when a new CBA deal was reached.

Until then, the funds would swell the escrow pot by hundreds of millions of dollars monthly. This largesse would be distributed only after the two sides made a separate deal on how to divide the pot.

In the article we take on the obvious objections: Why would players play games when not being paid? Why should the owners go along? Doesn’t this proposal defeat the purpose of a strike or lockout? How could this possibly work given the hatred, distrust, and irrationality that often plague labor disputes? Why would this turbocharge the incentives for both sides to make a deal? And so on.  We expect you to be skeptical at first . . . but, after a bit of thought, overwhelmed by the logic of it—but that’s your call.

The owners and players can still have just as bloody a financially fight as they could with a standard strike or lockout—but without the other costs and with a far more powerful incentive to settle sooner. Take a look here, and see what you think!